By 1900 the Rosary contained the remains of some 18,000 people, many of whom were prominent in business, the churches and politics. Also buried here are many less prominent people whose histories illuminate life and social conditions in Victorian Norwich. They include the driver and fireman of the Thorpe railway disaster, stagecoach and pub proprietors, and a survivor of the Charge of the Light Brigade.

Below are some brief details of four people buried in the lower section of the Rosary. 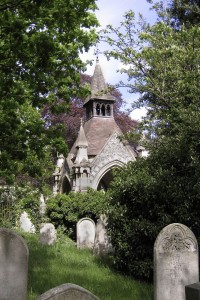 One of 8 children and orphaned at the age of 6  Boardman went on to become one of the foremost architects in 19th century Norwich. He made his mark on the city's appearance and some of the buildings he was responsible for were:
He lived at How Hill near Ludham, which he designed and built.

He became a partner in the Colmans mustard business when he was 21 and assumed overall control of the company in 1854. He moved the company's operations to Carrow from Stoke Holy Cross in 1858. By 1900 the site covered 26 acres of factories, stores and workshops, providing not only starch,mustard, washing blue and flour but employment for thousands of Norwich men. Colmans provided a range of benefits for their employees, including medical care, a canteen, housing and a school on Carrow Hill. By 1898 Colmans employed 2,500 people.
He died at the Colman house at Corton near Lowestoft and his body was brought to Norwich by train and then carried in an open hearse up Prince of Wales Road to the Congregational Church in Prince's Street for the funeral service. Afterwards the cortege came back down Prince of Wales Road to the Rosary,followed by carriages and about 1,200 of the Carrow works staff who passed 'crowds of enormous dimensions' many of whom were wearing mourning dress. There were also a large crowd at the Rosary, causing much of the cemetery to be roped off, and a large number of police to keep order. At the graveside the Carrow Band played suitable funeral music. 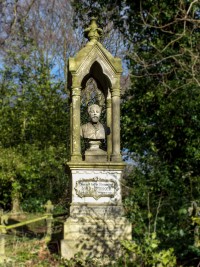 He was a circus proprietor whose memorial is one of the most striking in the Rosary. Barker met his death in tragic circumstances in April 1897 when he was setting up a 'circular railway' for a fair on the Cattlemarket. He was crushed between two wagons and suffered 14 broken ribs, fractures to the breastbone and spine and both lungs were punctured. He was declared dead on arrival at the Norfolk and Norwich Hospital. 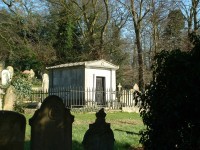 He was a doctor who lived at a house (now demolished) next to the Erpingham Gate, which leads from Tombland into the Cathedral Close. At the time of his death Cooper was the oldest practicing physician in Norwich. His mistress Anne Julia Pearson bore him a son and a daughter. The daughter, named Ada Nemesis, married the author John Galsworthy, who based his novel, 'Jolyon' on their relationship.
The mausoleum he built before his death is the only one in the Rosary, and it is said that on Sunday mornings Cooper was seen sitting in the doorway contemplating the view across the cemetery. One of his relatives still maintains the mausoleum.

SOME OTHER NOTABLES BURIED IN THE ROSARY:-